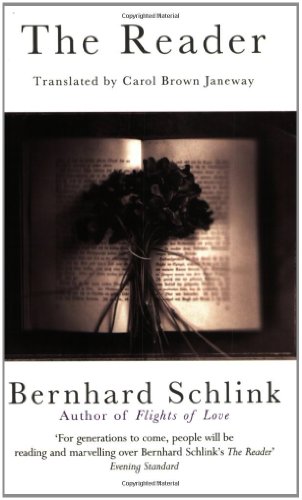 This is the kind of book you have to read as neutrally as possible.  It is told like the memoir (I really want to know if it's a thinly disguised memoir; I've done some digging and Schlink's life bears some similarities to that of his protagonist) of a fictional German man, Michael Berg, who grows up during World War II and who, at the age of 15, has an affair with a thirty-year-old woman named Hanna. Hanna is manipulative, tender, distant, playful, and guarded.  One day she disappears, and years later, when Michael is a law student, he discovers that she is on trial for hideous crimes.
There is so much guilt in The Reader - Michael's guilt over his small betrayals of Hanna, the guilt of Germans who tolerated the Holocaust, Holocaust survivors' guilt for having survived when others did not, etc.  Most central and mysterious of all is Hanna's guilt - does she repent?  Should she repent? Can she ever be absolved?  And was her relationship with Michael another crime, or did he hurt her more?
My reaction to their affair, which would be considered statutory rape in the modern US, contrasted with my reaction to HH's affair with Dolores Haze in Lolita.  Because Michael enthusiastically consents to the affair, and also, I guess, because Hanna is female (I know, that's a terrible reason), I sympathize with Hanna far more than I did with HH.  However, Hanna manipulates Michael.  One time, she hits him.  Their relationship is secretive, imbalanced, and unhealthy.  Furthermore, Michael never totally gets over Hanna.  Add to that the crimes for which she is on trial, and I should hate her. But Michael's sympathetic portrayal of Hanna and her great, strange, poignant secret insecurity make hating her hard.
I guess The Reader wasn't written to point blame in one direction.  It was written to present readers with a moral puzzle, and I, like many readers before me, am deliciously stumped.

Thank you for talking to me!! I wish you lots of good books and brownies!